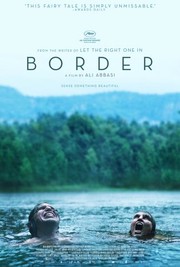 Stephen C
½ May 17, 2019
Supremely weird, but thought-provoking, even if a little morally ambiguous

Based on the short story by John Ajvide Lindqvist, written for the screen by Lindqvist, Ali Abbasi, and Isabella Eklof, and directed by Abbasi, Grans is a psychological drama, a study of loneliness, a romance, a body-horror, an investigation into what gives us our humanity, and a thriller. Set in a half-realist/half-fantastical milieu, no matter how fanciful the plot becomes, it remains always grounded in emotional realism. Problems include a subplot that feels disconnected from the main narrative, a ridiculous coincidence, a twist you can see a mile away, and a pronounced moral ambiguity that's difficult to parse. Nevertheless, this is unique filmmaking, raising all manner of questions about how we act towards the Other.

Tina (Eva Melander) is a customs officer with the ability to smell guilt. Suffering from deformities that give her a somewhat Neanderthal-like appearance, she is shocked to encounter Vore (Eero Milonoff), who has the same deformities. Although she smells something on him, she isn't sure what it is, and she lets him through customs. A few days later, he passes through again, this time volunteering to be searched. This leads to a shocking discovery, and the beginning of a strange relationship.

Given the fantastical components of the plot, one of the most interesting things about Grans is how grounded in realism the aesthetic is. Indeed, o of the strongest elements of the film is how emotionally relatable Tina's arc is; the events may be fantastical, but the emotions are quotidian - loneliness, shyness, fear, love, disgust etc.

An important example of this is that Abbasi sets up a contrast between the forest which surrounds Tina's home and the rest of the locations. Presented as a somewhat magical place, whilst everything else is filmed with a cold palette of greys and washed out light blues and greens, the forest is shot with richer colours; the design elements are more imaginative; the camera work more fluid; even the sound design is more varied, suggesting the whole place is vibrantly alive, in stark contrast to the cold concrete and steel world seen elsewhere.

The film's opening scene establishes Tina's attraction to the animal world; as she gently handles a bug, before carefully placing it back into the grass. Later, there's a scene with a moose, another with a fox, and a scene in which she is rushing her neighbour to hospital to give birth but stops to let a family of deer cross the road. These scenes are shot by cinematographer Nadim Carlsen with a sense of wonder, and an almost ethereal quality, as far removed from the mundanity of the customs desk as you can get. For all her closeness to animals, however, Tina is equally as distant from humans, and is desperately lonely, in a society that judges based on appearance. On the other hand, Vore is introduced as a rebel against social norms; whereas Tina is ashamed of her differences, he is proud of his - seen most clearly at a buffet, where he takes all the smoked salmon, and then hungrily eats it with little concern for etiquette.

The film also probes what gives us our humanity, suggesting that in a world populated by humans lacking in humanity, maybe Tina and Vore are the most human characters, or certainly the most humane. Tied to this is the notion of finding one's tribe, and what kind of sacrifices and subversions of one's moral code, if any, are acceptable in that search. However, the film does end in an extremely morally ambiguous manner, and I've rarely come out of a movie with such a pronounced case of "what was the director trying to say with that?"

Elsewhere, a child porn subplot does little but detract from the main plot. I get that it's there to show us Tina's abilities and her moral code, but too much time is given to it without it ever being made to seem urgent or important. And when it is finally integrated into the main narrative, it happens with a plot twist so telegraphed, if you don't see it coming, you've never seen a movie before. Also, when we learn how the two plots connect, and when we backtrack to the start of the film, we find that the entire house of cards relies on a monumental movie coincidence.

These missteps aside, Grans exposes the layers upon which our society is built, and is unafraid to suggest that exclusion has become a major facet of Western civilisation, an important topic at a time when there are increased calls for closed borders and increasingly irrational fears of the Other. The morality of the denouement is a little questionable, but this is still a fine piece of work with a lot on its mind.

Christy P
April 28, 2019
So strangely curios that you cannot stop watching. The beginning is able to capture your attention while building the story, without making you consider finding something else to watch.

Beverly H
April 25, 2019
This was an amazing movie. Best watched blind going in...its much better when you don't know what to expect!

½ April 18, 2019
Terrible. Everything that is different usually is hard to like. Horrible movie.

Chris J
April 11, 2019
What to say about this... I can definitely see how this helped in the decline of Movie Pass (just kidding, I think that they're actually doing okay in their distribution end)

This film was given a nomination for Makeup, and judging based on just that, absolutely all day long! However, the film itself wasn't quite up my alley. I don't enjoy films that stray so far off the path that you have to suspend reality just to take it in (Under the Skin is probably one of the best examples I can think of). However, there are definitely major Eraserhead themes going on throughout the film. So if you liked Eraserhead, then you may enjoy this as well.

I've seen things in this that cannot be unseen, there was so much to process in this, but not in a good kind of way. This may not have been Venom bad, but it didn't make my top 24 of the year for sure!

Fong K
½ March 29, 2019
This Swedish winner of Un Certain Regard award at the Cannes is an ingeniously imagined and beautifully crafted adult fairy table meditating gender identity and human morality in a curious love story of two visceral pariahs.

Mark C
March 28, 2019
Don't listen to the trolls, best to watch this film cold. It is weird. SO weird, and drags in places, but it will grasp your full attention at times.

Super Reviewer
Alec B
March 25, 2019
It's really unlike anything you've ever seen before, although the really impressive thing is how Abbasi takes a plot that's pretty ludicrous and takes it seriously, finding an effective emotional core to the story.

Tom K
½ March 23, 2019
It's not for everyone, but it beats the hell out of the mindless campy drivel being pushed by the big film companies today.

Dave V
March 16, 2019
Mesmerising. Engrossing. Almost 5 stars but a few moments made me laugh when I don't think they were meant to.

NEIL M
March 15, 2019
strange and surreal withleague of gentleman feel that is at times sad,funny ad very dark too.Great make up and a plot that is straight out of the Grimm fairy tales ...must see

Wendi D
March 13, 2019
This is an amazing story, slow, but so twisted and so different and the makeup artists certainly made it a believable Grimm style fairytale.

Mona B
March 11, 2019
Super weird and wonderful movie. Read as little as possible about it and just watch. For fans of the surreal.

Nominated for Best Achievement in Makeup and Hairstyling at this past Academy Awards, BORDER slipped by me when initially released, but I caught up with it on YOUTUBE. From writer/director Ali Abbasi along with co-writers John Ajvide Lindqvist (LET THE RIGHT ONE IN) and Isabella Ekl√∂f, the film exceeded my already high expectations and may just be the most unsung film of 2018. Simultaneously the stuff of fairy tales and nightmares, BORDER takes a very David Lynchian concept and humanizes it far more than I thought possible.

The filmmakers tell the story of Tina (Eva Melander), a Swedish border guard who resembles the distaff version of the GEICO Caveman. Known for her keen sense of smell, Tina has the uncanny ability to sniff out contraband or even guilty feelings. One day, Vore (Eero Milonoff) passes through and gets stopped. He looks cuts from the same cloth as Tina, and her fellow inspector reveals that Vore possesses some unexpected anatomy. VoreÔø 1/2(TM)s attraction to Tina feels palpable, animalistic even. Thus begins their extremely unorthodox relationship.

Around the same time, Tina exposes one traveler as a trafficker in child pornography. Her police boss, Agneta (a commanding and perfectly measured Ann PetrÔø 1/2 (C)n) uses Tina to help locate the people at the center of this ring. How this may or may not relate to the central storyline reveals itself as the film unfolds.

BORDER, while steeped in the grunge of dank forest locales and visceral sexuality, plays like a classic fable. To reveal anything more about where this story goes would spoil the experience, but suffice it to say, itÔø 1/2(TM)s unforgettable. ItÔø 1/2(TM)s a film about identity, about what it means to be human, and thematically would make a great double bill with Jonathan GlazerÔø 1/2(TM)s 2013 mindbender, UNDER THE SKIN, which starred Scarlett Johansson as a mysterious person out of place on this earth. BORDER places its characters in increasingly heightened situations, forcing them to reveal their most base of instincts. Occasionally surreal, it still stays focused on every nuance emanating from MelanderÔø 1/2(TM)s touching facial expressions. It doesnÔø 1/2(TM)t matter how many pounds of makeup she and Milonoff find themselves under, these two actors bite into their roles with an almost operatic abandon and convey so much emotion. Filled with nudity, dirt, wetness, and powerful sexual tension, Abbasi fills the screen with an array of memorable images. Think ERASERHEAD meets THE EMERALD FOREST for starters. With spare dialogue, it almost plays out like a silent film, communicating so much with the slightest sniff of a nose or baring of teeth. BORDER upends gender and morality in its search for our characters to truly be who they are inherently.

Tina, who prior to meeting Vole, lived a quiet existence with her benign but distant boyfriend Roland (J√∂rgen Thorsson). Stuck in their relationship rut, her life consists of work, dull nights at home, and the occasional visit with her Dad, who suffers from dementia and stays at an assisted living facility. Vole upends her entire world and changes the dynamics in all of her pre-existing relationships. Burning with charisma, Vole would be a Manson-esque cult leader in another story. Here, heÔø 1/2(TM)s rife with possibilities both sweet and exceedingly nefarious.

For those seeking a little adventure in their filmgoing experience, BORDER gorgeously fills that bill. Some imagery may be disturbing to some, but it presents almost everything as perfectly natural. Go for the intense growling and stay for the underlying gentleness. BORDER has sharp teeth and a warm heart.

Frankie K
March 1, 2019
If you want to watch something different and mercurial with superb acting, this is it.
Page 1 of 3