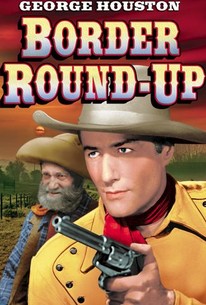 In this " Lone Rider" B-Western series entry, Tom Cameron (George Houston) and his pal Fuzzy Jones (Al St. John are deputy sheriffs helping their friend Sheriff Smoky Moore (Dennis Moore) rid the territory of a nasty claim jumper, Blackie (played, as always, to the hilt by favorite B-Western villain Charles King). Blackie and his murderous henchman, Indian Pete (Nick Thompson), are in league with a crooked lawyer, Masters (I. Stanford Jolley), who is not only after a valuable gold mine but also the miner's lovely daughter Amy (Patricia Knox). Taking time out to sing "There's a Cabin in the Clearin'", "When a Cowboy Rides", and "The Rollin' Hills", all by Johnny Lange and Lew Porter, "The Lone Rider" finally gets the goods on Blackie and Masters and is able to reunite the girl with her kidnapped father (John Elliott). A graduate of the Juilliard School of Music, the 6-foot Houston earned his paycheck the hard way at low-budget PRC and succumbed to a fatal heart attack at the age of 47 in 1944.

I. Stanford Jolley
View All

There are no critic reviews yet for Border Roundup. Keep checking Rotten Tomatoes for updates!

There are no featured reviews for Border Roundup at this time.