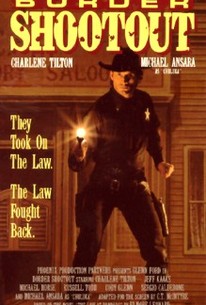 An Elmore Leonard novel was the basis for the old-fashioned western Border Shootout. In one of his last film appearances, Glenn Ford plays an aging, unpopular Arizona sheriff, transporting a dangerous criminal to federal prison. Ford leaves the town in the hands of part-time deputy Cody Glenn. Raised in the belief that honesty is the best policy, Glenn is ill-equipped to deal with a gang of cattle rustlers; he must also contend with the lynch fever stirred up local gadfly Jeff Kaake. Charlene Tilton and Michael Ansara are among the reliable cast members who tend to be ill served by C.T. McIntyre's haphazard direction.

There are no critic reviews yet for Border Shootout. Keep checking Rotten Tomatoes for updates!

There are no featured reviews for Border Shootout at this time.