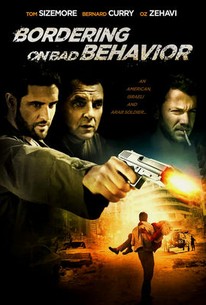 When Baz, a Lebanese soldier accidentally walks into a top secret Israeli communication base, he greets Bob, an American soldier, with a punch to the face, and Ari, an Israeli with a choke hold. Aware that he is in the wrong place at the wrong time, Baz fails to escape after triggering an emergency lock-down mechanism. Now, trapped for six hours, three sworn enemies are forced to evaluate their lives, their alliances and ultimately each other with two options...impending doom, or a chance at life. Truths are told, noses are broken, ribs are cooked, guns are drawn, and a peace plan is made. Time is running out for the trio. Will they survive without killing each other, and if they do, will they ever be the same again?

There are no critic reviews yet for Bordering On Bad Behavior. Keep checking Rotten Tomatoes for updates!

There are no featured audience reviews yet. Click the link below to see what others say about Bordering On Bad Behavior!