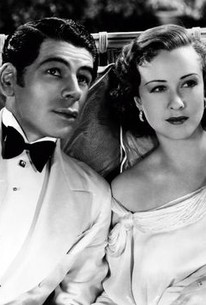 Paul Muni stars in this drama about a romantic triangle that leads to madness and murder. Overly enthusiastic Mexican attorney Johnny Ramirez (Muni) is disbarred after his first trial for his flagrant disregard of courtroom etiquette. In desperate need of work, he takes a job as a bouncer in a sleazy bordertown night club owned by Charlie Roark (Eugene Pallette). Charlie's wife Marie (Bette Davis) is immediately attracted to Johnny and makes a none-too-subtle play for him. But Johnny has his eye on Dale Elwell (Margaret Lindsay), a socialite who enjoys slumming in low-class dives and admiringly refers to Johnny as a "savage." Johnny tells Marie that it's against his principles to get involved with a married woman, so she decides to do something about that: she traps drunken Charlie in his car while it's locked in a garage, allowing the carbon monoxide to take Charlie out of the picture. When Marie explains that she killed her husband and is now available to him, Johnny wants no part of her; bitter that Johnny has snubbed her, Marie implicates him in Charlie's murder, leading to a dramatic and surprising trial. Paul Muni reportedly moved in with his Mexican chauffeur in order to study his accent and reproduce it accurately for this film.

William B. Davidson
as Dr. Carter

Beautifully shot by Tony Gaudio, well acted, grippingly directed, the film makes acutely acerbic points about privilege and prejudice; but typically of Warners in its social conscience mode, settles in the end for the status quo.

"Bordertown" otherwise manages to impale the spectator's attention before the picturesque and somewhat hysterical materials of the story.

Finish is phoney, but it can't hurt the previous good work. Casting throughout the film, which is also well written [from a novel by Carrol Graham] and paced, is exceptionally good.

[Muni's] performance, on the whole, is a typical Muni performance -- being vigorous, simple, unaffected and believable. He is one of those rare actors whose talents don't seem to be thrown pell-mell into the very teeth of the camera.

If you can forget some of the details (like Soledad Jiménez being the only authentic Hispanic person in the film), you will leave this film satisfied. [Full Review in Spanish]

The role of Johnny is one of those tense, slightly overwrought characterizations in which Paul Muni excels.

Noteworthy for another of Bette Davis' portrayals of a pathological hussy. She steals the picture away from Paul Muni.

There are no featured audience reviews yet. Click the link below to see what others say about Bordertown!