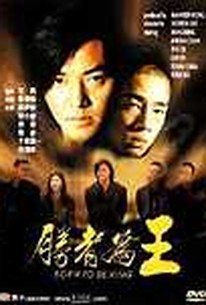 A disagreement over who will become the leader of a powerful Hong Kong triad organization threatens to destabilize organized crime in Taiwan, Hong Kong, and Japan in this entry into the long-running Young and Dangerous film series. As Taiwan's San Luen Gang prepares for the wedding between Chicken and Nanako, the daughter of the powerful Yamada Gang leader, his friends and partners in crime all start preparing for the big day. Not everyone is so pleased with Chicken's promotion, though, and when a disapproving member of the San Luen Gang attempts to set Chicken up, the rage between three dueling gangs threatens to erupt into full-blown war.

There are no critic reviews yet for Sheng zhe wei wang (Young and Dangerous Part 6) (Born to Be King). Keep checking Rotten Tomatoes for updates!

The franchise ran out of fuel way before this one. Pretty much the same story and same situations getting recycled over and over. Take away Simon Yam, Francis Ng and Anthony Wong and you are left with pretty much nothing good to watch.

Starts to become a bit formulaic, but the actors involved still pull it off.