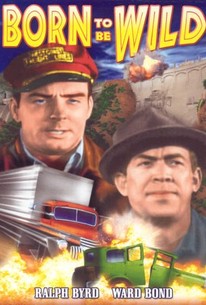 Born to Be Wild Photos

Absolutely no relation to the 1960s rock-n-roll tune of the same name, Born to be Wild is a fast-paced Republic programmer boasting some fairly impressive credits. Ralph Byrd, better known as moviedom's Dick Tracy, plays truck driver Steve Weston, while Ward Bond, usually seen as a bad guy in the late 1930s, costars as Weston's friend and partner Bill Purvis. Accustomed to taking on dangerous assignments, Steve and Bill don't even bat an eyelash when they're hired to haul a load of dynamite over a patch of treacherous terrain. Will they be able to deliver their cargo to a dam-demolition site without getting demolished themselves? Nightclub and radio songstress Doris Weston is cast as Steve's sweetheart Mary Stevens, who in an amusing scene literally "ties the knot" with her boyfriend. Coscripted by novelist Nathaniel West (of Day of the Locust and Miss Lonelyhearts fame), Born to be Wild has often been cited as a principal inspiration for Clouzot's 1953 classic The Wages of Fear.

Critic Reviews for Born to Be Wild

There are no critic reviews yet for Born to Be Wild. Keep checking Rotten Tomatoes for updates!

There are no featured reviews for Born to Be Wild at this time.

Born to Be Wild Quotes