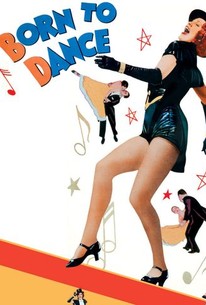 A never-completed stage musical was the source for the MGM superproduction Born to Dance. The plot is another three-sailors-on-leave affair, with Ted (James Stewart), Mush (Buddy Ebsen) and Gunny (Sid Silvers, who also co-wrote the script) romancing the eminently romanceable Nora (Eleanor Powell), Peppy (Frances Langford) and Jenny (Una Merkel). Nora aspires to become a dancing star, but her career nearly ends before it begins when she inadvertently comes between Broadway luminary Lucy James (Virginia Bruce) and her producer-lover McKay (Alan Dinehart). If anyone watching back in 1936 really cared about the plot, they probably weren't music lovers. The lovely Cole Porter score (his first written directly for the screen) includes "I've Got You Under My Skin", sung by Virginia Bruce to James Stewart, and "Easy to Love", warbled by Stewart to Eleanor Powell. Highlights include Reginald Gardiner's impersonation of a symphony-conducting traffic cop (a routine he'd previously performed on stage) and Eleanor Powell's climactic tap routine on board an art-deco battleship (a sequence later re-deployed for the climax of 1944's I Dood It).

Georgi Vasilyev
as Himself

Jay Johnson
as The Foursome

Anita Brown
as Anita, the Maid

Jonathan Hale
as Hector, the Columnist

Critic Reviews for Born to Dance

On the whole, Born to Dance is in the top flight of musical shows, the comedy is funnier than usual, the music better, the stepping faster.

The original songs by Cole Porter aren't all memorable, but they are lively and two of them are among is classics: "I've Got You Under My Skin" and "Easy to Love."

Audience Reviews for Born to Dance

There are no featured audience reviews yet. Click the link below to see what others say about Born to Dance!