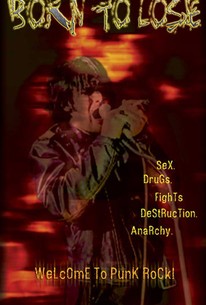 In this gritty independent drama, Stevie (Joseph Rye) is the lead singer of an up-and-coming Southern California punk band called the Spoilers. Stevie has both pipes and charisma, and the band has real potential, but the Spoilers also have a huge appetite for alcohol and drugs, especially Stevie, and while the band is looking for a record deal, many labels are wary of working with a band whose singer seems to be an OD waiting to happen. While trying to get his demo heard, Stevie meets a woman (Elyse Ashton) who works in the music business, and she soon offers to help Stevie and his band. She also falls in love with Stevie, but once she becomes involved with him, they both fall headfirst into drug addiction, and it looks likely that Stevie will die from dope long before he becomes a rock star. Born To Lose was the first feature from novice filmmaker and punk rock fan Doug Cawker; the soundtrack features performances by Iggy and the Stooges, The Modern Lovers, The Lazy Cowgirls, The Zeros, The Streetwalkin' Cheetahs, and more.

Wendy Latta
as Janie
View All

Critic Reviews for Born to Lose

There are no critic reviews yet for Born to Lose. Keep checking Rotten Tomatoes for updates!

There are no featured reviews for Born to Lose at this time.