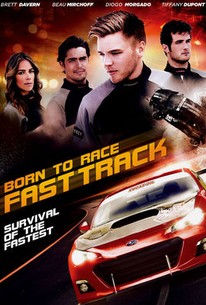 Eight skilled racers complete for two open slots on a prestigious racing team, and a shot at the big time.

Tiffany Dupont
as Michelle
View All

There are no critic reviews yet for Born to Race: Fast Track. Keep checking Rotten Tomatoes for updates!

The hot ass sequel to the completely unknown street racer flick that was actually good fun is here! Yep once again its time to show how rice racers rule, don't believe me? well virtually every main car in this film is Japanese...until the final race of course but the protagonist drives the ever supreme Subaru. Hell they drop the mighty Mustang in favour of the unbeatable Subaru for the final show down (bricks can't race)...oh and no Merc's, BMW's or Audi's required thank you, sheesh! So straight away I noticed one thing, the main cast has been completely changed from the original, not really a good sign methinks. It also made it harder to recognise who people were at first...until I got their names. This time our young hero has won some kind of scholarship to a boy racer school where they teach...racing, but not boy racing. This place is called the 'Fast Lane Racing Academy' (indeed) and is run by two hard nosed old boys who don't take no shit from boy racers. All the youngsters in this academy are there to try and get on board a professional racing team but only the top two will make it...for some bizarre reason. Surely they are all good enough to get positions on various teams otherwise they wouldn't be there. How can I put this...its basically 'Top Gun' with cars. The class are the most stereotypical bunch of lantern jawed young pretty people this side of a Stephenie Meyer's novel. You have the dastardly yet slick haired Italian duo, the all American Texas cowboy, a British Lewis Hamilton lookalike and at the same time token black guy, a token hot ass blonde female driver (there's always gotta be a hot ass blonde in there somewhere), a German and a Japanese American. As said the two academy teachers are no nonsense gruff old timers whose job it is to whip these rookies into shape in all manner of cliched predictable ways. You can count on Corbin Bernsen for that, amazed they didn't get Skerritt. As you would expect most of the film consists of lots of training montages accompanied by rockin' soundtracks and lovely sunsets. As you might also expect there are the usual predictable issues along the way. Our protagonist can't get to grips with the course and is having trouble blending in...he's also getting bullied by the two Italians, there are accidents that knock certain students out of the running, girlfriend troubles, strong verbal scoldings from the teachers, rousing verbal speeches from the teachers, flirting, showing off, fighting, striding across the sun baked tarmac against blue skies in natty jumpsuits and the return of an old enemy. What can I say its all completely unoriginal and amazingly cheesy, we've seen this type of thing a shitzillion times before but it always seems to get rehashed over and over. On the other hand it does exactly what it says on the tin and gives you what you want, fast cars tearing around smooth tracks looking nice and shiny with plenty of throbbing engines and howling tyres. There is a nice selection of cars on show here and there but its mainly a Japanese affair as usual, fine with me being a Jap fan. The camera work is handled well giving all the cars good screen time from various angles, all stunts and driving sequences are real and the racing does get your heart thumping. Its a different angle from most other racing flicks these days as its not about street racing with modded cars. This film goes down the more straight laced professional route which is fresh but admittedly a bit dull at the same time. As I already said most of the film is training and its slightly uninteresting because its too predictable. They also use the same cars for all the training sequences (Toyota Celicas) which doesn't help the dullness factor. End of the day its the age old adage...if you like car porn or you're a petrolhead then you'll probably like this. If cars aren't your thing then obviously this isn't for you. Personally I quite liked it but it wasn't as fun as the first film. Both this franchise and 'Need for Speed' are giving 'The Fast and the Furious' a good run for its money in my view. 'If any of you guys pull a Vin Diesel stunt like this again off the track you're outta here!'