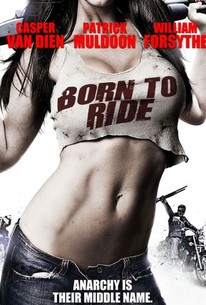 Two roughneck bikers stumble into evidence of a major political blackmailing, and race to outrun the killers who seek to suppress it at any cost. Mike (Casper Van Dien) and Alex (Patrick Muldoon) are two pals who measure their freedom by the mile. They're on their way to Sturgis when they acquire a videotape that exposes a major political conspiracy. Now, in order to survive long enough to expose the treacherous con game, these two bikers must ride like their lives depend on it, and never hesitate to take a clear shot. William Forsythe and Theresa Russell co-star in this blacktop thrill ride from director James Fargo (The Enforcer, Every Which Way But Loose).

Jack Maxwell
as Vic
View All

Critic Reviews for Born To Ride

There are no critic reviews yet for Born To Ride. Keep checking Rotten Tomatoes for updates!

There are no featured reviews for Born To Ride at this time.