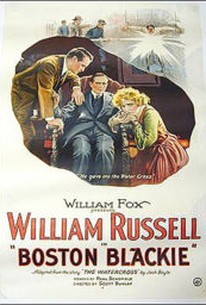 Pulp writer Jack Boyle's 1910's jewel thief turned detective came to the screen for the second time in 1923, courtesy of the Fox company, with this picture. The virile-looking William Russell starred in the title role as a former prison inmate campaigning to outlaw Warden Benton's (Frank Brownlee) infamous "Water Cross" torture. Benton, however, is successful in his attempt to have Blackie arrested and returned to the prison, but his evil schemes are ultimately thwarted by Mary Carter (Eva Novak), Blackie's girlfriend, who manages to alert the governor. Boston Blackie had made his screen bow in Boston Blackie's Little Pal, a 1918 Metro release starring Bert Lytell, and would return in 1927 in the self-explanatory The Return of Boston Blackie, a low-budget affair from Chadwick Pictures that starred Raymond Glenn (aka Bob Custer). The character enjoyed its greatest popularity in the early 1940s when Columbia Pictures inaugurated a regular series starring the square-jawed Chester Morris.

There are no critic reviews yet for Boston Blackie. Keep checking Rotten Tomatoes for updates!

There are no featured reviews for Boston Blackie at this time.