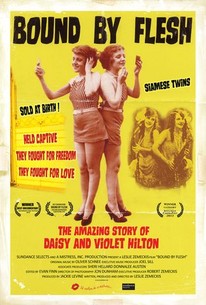 American sideshows were in fairs, circuses and carnivals. There were acts such as glass blowers, musicians, and also the freaks. Most freaks just stood there while the audience wondered past. The Hilton Sisters however were trained to put on an engaging act. They sang, they danced and played a variety of musical instruments. They were "hugely popular." "Bound By Flesh" explores the American sideshow, its origins and its heyday when the Hilton Sisters were on display for huge "streams" of crowds pouring into the tent to get a glimpse of these "fetching" sisters. The film includes interviews with Ward Hall, known as the "King of the Sideshow." He is the last of the sideshow promoters in the style of a P.T. Barnum.(c) Sundance Selects

Critic Reviews for Bound By Flesh

Leslie Zemeckis' documentary about their curious and ultimately sad lives is a fascinating snapshot of the era of nickel-a-peek circus sideshows.

Likely to stay with you forever.

I found it immensely touching that these women found it in themselves to keep plugging away.

Both tragic and almost incomprehensibly strange.

They were just people - which is why their story may not be that unique, and may even hide a few lessons for everyone.

The other aspect of Bound by Flesh that works so well is its compassionate portrait of two women who were, briefly, famous for their beauty despite their unconventional bodies.

Bound by Flesh is an excellent documentary.

Stranger than fiction and fascinating.

Bound By Flesh plays with a bygone showmanship that at times feels more like a celebrity gossip show on E! than a feature documentary.

Zemeckis explores the tragic lives of the Hilton Sisters, conjoined twins paraded and exploited financially as so-called freaks in the heyday of carnival sideshows. Intimating as well twisted notions of fame, and the freak show roots of reality TV today.

If you've ever had any interest in early American entertainment, the world of freak shows, or in the Hilton Sisters in particular, this is exactly the film you need.

Audience Reviews for Bound By Flesh

There are no featured audience reviews yet. Click the link below to see what others say about Bound By Flesh!