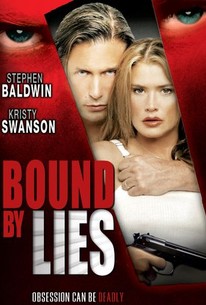 In this crime thriller with a kinky undertow, police detective Max Garret (Stephen Baldwin) is a cop with a habit of doing things his own way -- so much so that he's just coming off of a six-month suspension for disregarding orders. Garret's first case after returning to active duty is looking into the death of a drug addict who jumped off the roof of a building. However, as Garret and his partner, Eddie Fulton (Charles Malik Whitfield), dig deeper into the matter, they discover links to a series of murders. The victim jumped from the roof of a loft owned by Laura Cross (Kristy Swanson), a photographer who specializes in disturbing erotic images; as Garret questions Cross, he finds himself increasingly attracted to her and he soon falls into an affair with her, but Fulton suspects her involvement in the death is hardly casual -- and unlike Garret, he has a close familiarity with her notorious past. Bound by Lies was produced and briefly distributed under the title Betrayed.

Critic Reviews for Bound by Lies

There are no critic reviews yet for Bound by Lies. Keep checking Rotten Tomatoes for updates!

Audience Reviews for Bound by Lies

Just a very average films, watchable yet missable. Of course the appeal for me with this film was the mention of serial killer, hmmm, I'll let you decide what you think about that one.