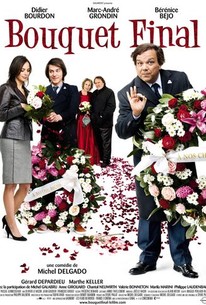 BOUQUET FINAL is the directorial debut of French actor-screenwriter Michel Delgado (THE CORSICAN FILE). The black comedy centers on professional rivalry at a funeral parlor, where an older, more experienced worker, Gervais (Didier Bourdon), is passed over for a promotion in favor of a young newcomer, Gabriel (Marc-Andre Grondin). To add insult to injury, Gervais is being forced to train Gabriel in his new position, leading to some mean-spirited but hilarious on-the-job hazing. French film legends Gerard Depardieu and Marthe Keller co-star as Gabriel's bohemian parents.

There are no critic reviews yet for Bouquet final. Keep checking Rotten Tomatoes for updates!

There are no featured reviews for Bouquet final at this time.