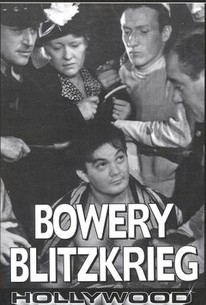 Former Dead End Kid Huntz Hall made his first appearance with the East Side Kids in 1941's Bowery Blitzkrieg. The plotline concentrates on Danny Breslin (Bobby Jordan), a good kid in danger of going bad thanks to the influence of two-bit crook Monk Martin (Bobby Stone). When Danny is disqualified from the upcoming Golden Gloves boxing championship, his pal Mugs (Leo Gorcey) takes his place. Thanks to the chicanery of Monk and his gambling cronies, the public becomes convinced that Mugs intends to throw the fight. Nothing could be further from the truth, but for a while it looks as though both Mugs and Danny will be kayoed permanently by the villains. As "Limpy", Huntz Hall doesn't have much to do except act as Mugs' dimwitted stooge; Hall's unique comic gifts wouldn't fully blossom until the next East Side Kids entry, Spooks Run Wild.

There are no critic reviews yet for Bowery Blitzkrieg. Keep checking Rotten Tomatoes for updates!

There are no featured audience reviews yet. Click the link below to see what others say about Bowery Blitzkrieg!