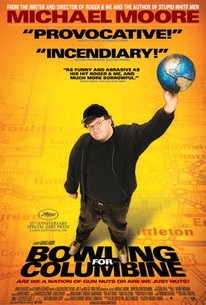 Critics Consensus: Though it may not always convince, Bowling for Columbine asks important questions and provokes thought.

Critics Consensus: Though it may not always convince, Bowling for Columbine asks important questions and provokes thought.

Critic Consensus: Though it may not always convince, Bowling for Columbine asks important questions and provokes thought.

A look at America's love affair with firearms and the pathology of violence in the United States, which has the highest gun-murder rate in the world. The question of why Canada - with 7 million guns for its total of 10 million households - doesn't suffer from the horrific gun violence of its large neighbor to the south is examined.

Barry Glassner
as himself

James Nichols
as himself

News & Interviews for Bowling for Columbine

View All Bowling for Columbine News

Critic Reviews for Bowling for Columbine

Readers of these pages need no introduction to Michael Moore, nor will they require any acrobatics on my part to go see Bowling for Columbine, which is (brace yourselves) pretty terrific.

It's both powerful and infuriating, brilliant and facile, hilarious and horrific, witty and demagogic. It's a great movie to argue about.

All in all, Mr. Moore has given us a lot to think about in Bowling for Columbine, and he has entertained us royally in the process.

Fun and informative, thoughtful and thought-provoking.

Bowling for Columbine isn't a subtle film; instead, it makes its case with Magnum force.

The shots of desolate, devastated neighborhoods in Flint, once a center of automobile production, are among the most effective in the film.

An extremely effective, if not rambling film that asks the question "Are we (America) a nation of gun nuts, or are we just nuts?"

Though Moore's style and biases have often been called into question, Bowling for Columbine diagnosed America's gun problem...

The most striking thing about Michael Moore's 2002 documentary, Bowling for Columbine, is how painfully relevant it still is.

Audience Reviews for Bowling for Columbine

With the school shooting in Colorado as a starting point Moore questions America's mood and resolution: Are guns the answer to the difficulties our society faces, or in fact one of the many problems that must be addressed? Like a late night barroom political conversation he's a little all over the map and lacking direction but his concerns are more than valid. A solid think piece.

You may not agree with Moore's sometimes questionable methods, but there is no denying that he presents some very strong arguments in this important, thought-provoking exposé of what drives and motivates these occurrences in a country where fear is instilled into people by a crippled system.

Michael Moore examines the social climate which resulted in the massacre at Columbine High School, when two socially awkward students armed themselves with automatic weapons and went on a killing spree. Michael Moore is very much a Marmite kind of film maker; people either love or hate him and his one man crusades against the established way of thinking. I personally applaud his willingness to stand up to those who would suppress the truth to promote their own agenda and let's face it, the American corporate system is the biggest propaganda machine in the world so anyone claiming that Moore is "biased" really ought to be taking a closer look at his opposition. In Bowling For Columbine he surprisingly does not point the finger directly at US gun culture (although there has to be something to be said for Chris Rock's ammunition pricing system! If it works for cigarettes...) Instead he examines the economic climate in which the local community had been drained of employment and opportunity, the media's sensationalist, fear-mongering agenda and the lack of hope that the educational system cultivates within the disenfranchised. Occasionally a little heavy handed (ending on a confrontation with Charlton Heston which comes across as the meaningless harassment of an old man was a mistake) but always informative and entertaining.

A terrific portrait of a America full of fears and violence, a great masterpiece by Michael Moore. Fresh.