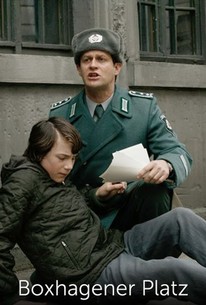 Love, death and underhanded doings are in the air in this bittersweet comedy-drama from director Matti Geschonneck. It's 1968, and while revolution stirring in much of the world, things are the same as they always are in Boxhagener Platz, a neighborhood in East Berlin. Otti (Gudrun Ritter) is an elderly woman who lives with her ailing husband Rudi (Hermann Beyer), her son Klaus-Dieter (Jurgen Vogel), his wife Renate (Meret Becker) and their teenage son Holger (Samuel Schneider). Holger has a close relationship with his grandmother Otti, and often accompanies her on her frequent visits to a nearby cemetery, where she looks after the graves of her five previous husbands. Rudi doesn't appear to be long for this world, and a pair of suitors are already making their interest in the future widow known -- a fish salesman who is said to have a notorious past (Horst Krause) and an spry but aging philosopher (Michael Gwisdek) who travels between East and West Germany and played an active role in political rebellion of the past. As Holger is fascinated by the soap opera of his grandmother's life and the philosopher's conversations about the student revolts taking place in Paris, Klaus-Dieter, a police officer, has his work cut out for him when the fish salesman dies under suspicious circumstances. Based on a novel by Torsten Schulz, Boxhagener Platz received its world premiere at the 2010 Berlin International Film Festival.

There are no critic reviews yet for Boxhagener Platz. Keep checking Rotten Tomatoes for updates!

There are no featured reviews for Boxhagener Platz at this time.