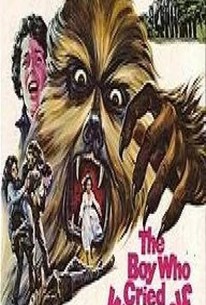 This adventurous horror movie chronicles the exploits of a boy whose father is changed into a wolfman. The trouble begins after the newly separated father and his son are attacked by a werewolf on a camping trip. Once the wife figures out what happened, she divorces him. The boy tries to explain it to the authorities, but they disbelieve him at first. Eventually they do believe, and the werewolf is finally slain.

Robert J. Wilke
as The Sheriff

Critic Reviews for The Boy Who Cried Werewolf

The risible werewolf makeup sinks this picture almost from the start, with some daft plotting and Scott Sealy's irksome emoting further sealing the deal.

Audience Reviews for The Boy Who Cried Werewolf

There are no featured audience reviews yet. Click the link below to see what others say about The Boy Who Cried Werewolf!

The Boy Who Cried Werewolf Quotes