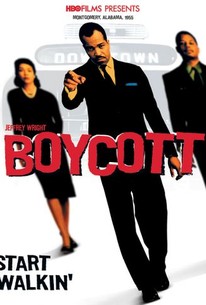 In 1955, an African-American woman named Rosa Parks dared to take an empty seat in the "Whites Only" section on a city bus in Montomery, AL, and sparked one of the first major battles in the civil rights movement of the 1950s and 1960s, thus bringing the work of Martin Luther King to the attention of many Americans for the first time. Boycott is a made-for-TV movie that dramatizes the events of the Montomery bus boycott, weaving vintage newsreel footage with scenes depicting the public and private dramas involved in the protests. Boycott stars Jeffrey Wright as Martin Luther King, Carmen Ejogo as Coretta Scott King, and Terrence Dashon Howard as Ralph Abernathy; CCH Pounder, Reg E. Cathey, and Shawn Michael Howard highlight the supporting cast.

As Dr. Martin Luther King Jr., Jeffrey Wright is completely in step with their particular bent, playing the civil rights leader with hushed zeal and an inner flame that grows into a fuel burn by telepic's end.