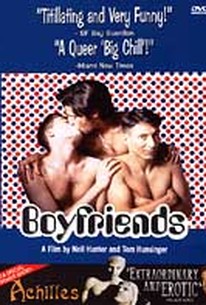 In this British dramatic comedy, three gay couples spend a weekend in the country as they try to sort out their relationships. Paul (James Dreyfus) and Ben (Mark Sands) have been together for five years; the first four were happy, but things have gotten difficult in recent months, and they're considering calling it quits. They've rented a house in the country for Easter weekend and have brought along some friends, whose love lives are also in transition. Owen (Andrew Ableson) and Matt (Michael Urwin) have been seeing each other for three months and are wondering if the time is right to move in together. Meanwhile, Will (David Coffey) and Adam (Darren Petrucci) recently shared a one-night stand, and Will is hoping it will grow into something deeper, though Adam knows better. ~ Mark Deming, Rovi

David Coffey
as Will

Russell Higgs
as Mark
View All

There are no critic reviews yet for Boyfriends. Keep checking Rotten Tomatoes for updates!

A bunch of guys sitting around whining. Ugh!! Similar to 3 Day Weekend which while not great was better than this morose affair. Best thing that can be said about it is that it has some great Dinah Washington songs as part of the soundtrack.