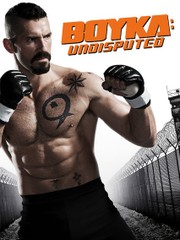 Viktor N
November 22, 2018
Love the character, funny script writing though how he always finds himself in a tournament.. but it's well filmed, keeping the camera in a bit of a distance so you can see the moves, otherwise what's the point?!!

½ August 11, 2018
It was alright for a fighting movie. The plot wasn't terrible, and the fights were pretty exciting. Sometimes , the actors were out of character, but as an overall, the movie was good.

Marvin K
½ June 10, 2018
Another great martial arts film same as II and III. The sad part is that he did not go to Budapest.

The last film in the series was seven years ago. I almost forgot everything about it. I had no time to have a quick glance on those before trying this, but while watching this, all the memories came back. It was different. Different means, they wanted the franchise back in action, so they have started with a simple storyline. Everything was predictable in the film, but that was not the point. They a wanted platform, so to move to the better side in the future.

Yuri Boyka was looking forward to take park in a big league, but his last fight did not go well. He won it by a knockout, though the opponent did not survive. That mentally disturbed him, so he wanted to make a few things right. Now, on the eve of the big event, he set to a quick trip to Russia. Why he went and what had happened there, all are the other side of the tale with some good fights and emotions.

Scott Adkins was great. This part kind of reminded me the 'Rocky'. Particularly for the sentimental reasons. The mix of that and stunts were good. Familiarity was the weakness of the film, even though enjoyable. Especially it is for Boyka and 'Undisputed' series fans. They surely would love it. It was a wonderful re-initiation, but hoping better sequels to follow and in a grand scale as well. So when's the next one!

Sajjan J
September 20, 2017
Awesome fights, but gets boring, cuz it's just about fighting.. script is weak. This will be a treat for MMA fans and guys who wish they could move like Scott Adkins. :)

Alec F
August 27, 2017
Great. Having seen the previous films this film lives up to its predecessors and it does well at delivering action packed excitement. Boykas character development was great, he was vulnerable because viktors wife's life was in danger and boyka got injured and nearly killed.

Colin M
August 26, 2017
a good action movie when now yuri boyka is a good guy and scott adkins made a great job portrait him perfectly

Brian G
½ August 9, 2017
Adkins is good at these action flicks. No surprises here, but fun.

Jose C
August 8, 2017
The plot is so stupid but the fights were cool. That's these movies summed up.

Dailiesel M
August 2, 2017
another hit more excellent movie my respect for this actor and so I see open more than boyka waithing for more