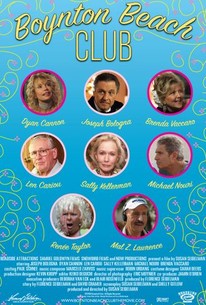 Critics Consensus: While the movie has been praised for showcasing a cinematically underused and disrespected age group, it also has the small-screen feel of a silly sitcom.

Critics Consensus: While the movie has been praised for showcasing a cinematically underused and disrespected age group, it also has the small-screen feel of a silly sitcom.

Critic Consensus: While the movie has been praised for showcasing a cinematically underused and disrespected age group, it also has the small-screen feel of a silly sitcom.

A handful of men and women "of a certain age" pick up the pieces of their lives and look for new love after the loss of their mates in this comedy drama from writer-director Susan Seidelman. Jack (Len Cariou) married his high school sweetheart when they were still in their teens, and when she dies in her early sixties, he is emotionally devastated. Jack's friends and family insist he needs to start living again, and he begins attending a support group for bereaved senior citizens. Jack strikes up a friendship with fellow widower Harry (Joseph Bologna), who offers advice on making time with the ladies, something he's developed a strong interest in since his wife's passing. At their meetings, Jack makes the acquaintance of Sandy (Sally Kellerman), an attractive and intelligent woman who - via a number of obvious sexual advances - makes no secret of her attraction to Jack, though he isn't sure he's ready for a new relationship. Jack and Harry also cross paths with Sandy's friends Marilyn (Brenda Vaccaro), who recently lost her husband to an absent-minded driver with a cellular phone, and Lois (Dyan Cannon), who still flaunts her considerable sex appeal and is dating a younger man, Donald (Michael Nouri). Also screened as The Boynton Beach Bereavement Club, The Boynton Beach Club also stars Renee Taylor, Bologna's wife and frequent acting partner.

Irene B. Colletti
as Judy

Marjorie O'Neill-Butler
as Woman in Pool

Critical Consensus: "Descent" and "Talledega" Leave "Listener" and "Barnyard" in the Dust

hanks to Susan Seidelman for reminding us that romantic comedy is suitable for any population or age group...

Seidelman maintains the narrow path between ridicule and dignity in a movie that dishes out humour even-handedly, but spares the characters total humiliation.

Replaces one set of clichés with another, and does what all lame comedies do to young and old alike: It robs them of their humanity and makes them cute.

There's no character in the group who doesn't ooze good-natured charm.

Unsatisfying comedy-drama, which features a cheesy golden-oldies soundtrack that feels even more packaged than the dialogue.

More a series of anecdotes than an insightful dramedy and relies too much on absurd coincidences and needless sitcom-style lying.

Seidelman has always had a knack for treating even the most unique characters with a humanity and respect.

It's life affirming, amusing and touching, as relationships struggle and blossom, while friendships form a rock-solid boost to newly imposed loneliness

Both sweet and real.

There are few scenes in films that I regret seeing, two of which are unfortunately in Susan Seidelman's maudlin "The Boynton Beach Bereavement Club."

Despite its best intentions, this seems like a hack job, a routine directing assignment shoved through its paces under the restrictions of a low budget.

Ultimately, the film comes off as a sexed-up cable episode of The Golden Girls, but it still offers amusing scenarios and likeable older characters of a sort too seldom seen on modern movie screens.

Pleasant diversion with an able cast who don't get a chance to be featured prominently any longer. Dyan while good in her role looks like hell.

Positively quaint enough to be embraced by its core demographic and withstood by everybody else.