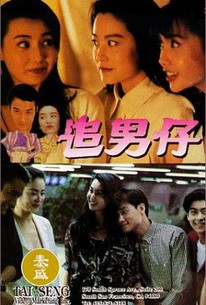 Popular Hong Kong filmmaker Wong Jing directed this outrageously bizarre comedy about three sisters trying to hook up with boyfriends to please their father -- whom they think is dying of testicular cancer -- on his birthday. Siu-tung (Brigitte Lin) is a mannish policewoman who goes after a mincing masochist named Simon (Tony Leung); Siu-nam (Maggie Cheung) is a social worker who falls for the uncouth gangster Wu Ying (Jacky Cheung); and Siu-sze (Chingmy Yau) is a doctor who romances a 27-year old virgin named Chi-ko (Dior Cheng). Added to these situations is the arrival of their father's gold-digging overseas pen pal and a deranged psycho called Wild Dog (Ken Lo) who wants to kill Siu-tung. Tony Leung scores points with a send-up of Bruce Lee, and there is a very funny Triad Olympics competition featuring machete relay races and a long-jump event in which contestants are weighted with bags of heroin. Everything works out well in the end, as the girls actually fall in love with the men whom they pursued for the birthday party and their father turns out to have healthy testicles after all. Sandra Ng is among the numerous familiar faces in the large supporting cast.

Critic Reviews for Boys Are Easy

There are no critic reviews yet for Boys Are Easy. Keep checking Rotten Tomatoes for updates!

There are no featured reviews for Boys Are Easy at this time.