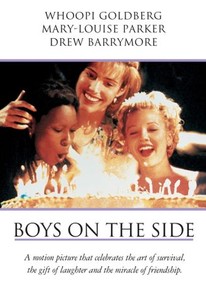 Boys on the Side Photos

In the tradition of Fried Green Tomatoes, this touching drama focuses upon the relationships of three strong, independent women who come to love and need each other on the way to Southern California. The story begins in New York when Jane, a night club singer, chances to meet Jane, a tense real estate executive on a trip to souther CA. Jane's friend Holly joins them after she and her boyfriend the drug addict have a big fight. When Robin becomes terribly ill, the three must stop in Tucson where they set up a house. Jane, a lesbian, must come to grips with her romantic feelings toward the ailing Robin.

Amy Ray
as Herself

Emily Saliers
as Herself

Lori Alan
as Girl with Attitude

Niecy Nash
as Woman at Diner

Cheryl A. Kelly
as Hotel Clerk

News & Interviews for Boys on the Side

23 Fresh Movies and TV Shows Streaming on Netflix in April

View All Boys on the Side News

Critic Reviews for Boys on the Side

Honestly one of the most beautiful tributes to adult friendships between women that I've seen.

The three women are so spirited and funny -- so emotionally keyed into all the hearts and flowers -- that they give the movie their own kind of truth.

Goldberg and Parker are extraordinary.

It's decent mass consumption entertainment, but there's not much in the way of meat.

It's an original, and what it does best is show how strangers can become friends, and friends can become like family.

The impact of average individuals dealing with incredible challenges as they navigate the twists and turns of life make this movie a timeless classic of courage and heroism that will undoubtable impact our society for years to come.

makes me cry every time

A bit soapy, yes, but it's high quality soap.

Total chick-flick -- but quite a bit better than it looks.

Touching drama about some idiosyncratic people who must learn how to help and be helped by those who cherish them.

Audience Reviews for Boys on the Side

This is a movie I have watched many times over the years and have owned in more than one format (VHS, laserdisc and now DVD... and frankly the transfer on the DVD is so crappy if it comes out on blu here, I am all over it!), so that gives you some idea how much I love it and how biased this review is going to be! As far as I am concerned, it is the perfect movie about female friendship... another one that leaves SATC in the pale (fun though those movies might be). Casting is perfect. I am far from a Whoopi Goldberg fan (she normally grates on me), but she is really good in this as Jane, a musician and lesbian who meets up with Robin (Mary-Louise Parker - just perfect here. I had never seen her in anything before this and I was drawn to her portrayal of the slightly dorky but beautiful Robin). Both are looking to leave town for various reasons and decide to car pool to California, though seemingly totally incompatible. Along the way they pick up Jane's friend Holly (Drew Barrymore - also a perfect role for her) who has got herself into a bit of a scrape with her dodgy boyfriend. The three get to know each other better, secrets come out and long lasting friendships are formed. The ending is incredibly sad and moves me to tears everytime without fail. I don't want to say more than that and ruin it for anyone who hasn't seen this. Even though the twist which leads to the end is revealed fairly early on in the movie, you do still kind of hope it will not happen as you just really can't wish any bad on this emotionally scarred character. I had not realised that Matthew McConaughey plays the policeman Holly falls in love with - I have not watched this movie in a few years, and I probably didn't really know who he was at the time. (Now of course he is in just about every chick flick going). He is pretty slimy here - both himself and the character, so I guess he suits it!

Don't remember much about this one.

The Best and precious gift ever is laughter and the miracle of friendship.

his road/buddy movie explores the special relationships that can develop among women. Little emotionally friendship story on the road, but sadly at the end.

Boys on the Side Quotes