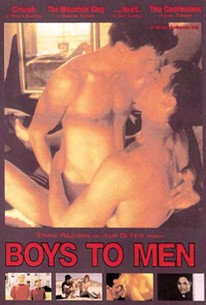 A four-part anthology film dealing with homosexuality from the young to the old, this feature includes Crush, detailing the budding friendship of a 12-year old girl and a 16-year old boy, who bond over their favorite TV program and musical tastes. The young girl develops a crush on her friend, only to find out that he is gay. When she discovers his interest in another boy around school, she attempts to play matchmaker. The second short, The Mountain King, details a young street hustler who makes a play for a straight man on a deserted beach one afternoon. Through persuasion, the drug-addicted hustler manages to find the inner desires of his new conquest, changing the patterns of his sexual life, if only for a brief while. . . .lost is a look at a day in the life of a young man who is first seen engaging in unsafe sex with a random partner, then shown to be immersed in a world of drugs, anonymous tricks, and eventually HIV. In the final installment, The Confession, a dying Catholic asks his partner of 35 years to send for a priest, even though the partner is greatly opposed to such a request.

Ema A Tuennerman
as Tina

Tom Fitzpatrick
as Caesar
View All

Critic Reviews for Boys to Men

As a whole, the appeal of Boys to Men has more to do with its uncommon subject matter than with its original cinematic qualities.

'The Mountain King,' about a closeted young man and a hustler at the beach, is the best of the lot in every respect.

Uneven in visual and dramatic quality, are unquestionably sincere in their efforts to examine the sexual and psychological nuances of a range of relationships from adolescence to old age.

The good stuff is sparse.

Why Not Just Stay Home and WatchQueer As Folk? Because the characters in these shorts act like real people. Not a single shiny International Male shirt among them.

A collection as mixed in quality as these things often are.

There are no featured reviews for Boys to Men at this time.