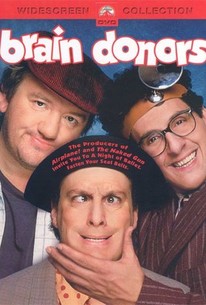 Brain Donors is a game attempt to redo the Marx Brothers' A Night at the Opera in a contemporary setting. John Turturro plays the "Groucho" character, a shifty lawyer (he's even given a Grouchoesque three-barrelled moniker). Bob Nelson is the "Harpo" counterpart, a puckish handyman. And Mel Smith completes the trio as a Chico-like cabbie. All three conspire to save a failing ballet company on behalf of dowager Nancy Marchand, who does a film-length impersonation of Margaret Dumont. At times, Pat Proft's script comes off more like a 3 Stooges short than a Marx Brothers romp, but that's not so bad. What hurts the film is its fluctuating pace, which shifts into neutral just when it should go into hyperdrive. Will Vinton's Claymation opening titles supply some of the film's biggest laughs.

Charlotte Zucker
as Woman with Program

Gary Grossman
as Father
View All

This are fun and games with a scantily clad young woman. But by today standards, it's not very naughty stuff.

Pleasant little comedy with lots and lots of gags.

Weird reworking of Night at the Opera that's more peculiar than successful.

Someone needed to donate one to this director.

The jokes come so frequently you won't even have time to sneer at the lame ones. And yeah, a lot of 'em are kinda lame. John Turturro is, however, a man possessed.

Every Marx brothers movie condensed into one hell of a zany adventure. This movie is gut bustingly funny.

Amazingly funny film with great performances by all the cast, especially Turturro. Great one-liners are delivered at a rapid pace and this movie is worthy of being put alongside the Marx Bros series even though it's only an "homage". "I want you to have my children... they're out in the car" Hilarious, and no, I'm not making fun of you Timbo.