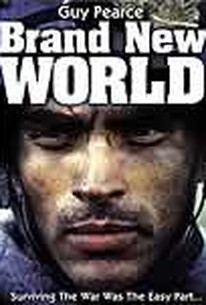 Roberta Hanley made her feature directorial debut with this British drama based on the play by Jeff Noon about a civil war in the near future. The war zone is on a barren island where farmers toil in a manner recalling the days of the Industrial Revolution. Young single women are recruited and sent off to distant outposts, where sniper fire and explosions indicate the presence of the unseen enemy. This was filmed on the Isle of Man, with documentary-style camerawork plus input from military advisor Chris Byrne. Shown in competition at the 1998 AFI Film Festival. ~ Bhob Stewart, Rovi

There are no critic reviews yet for Brand New World. Keep checking Rotten Tomatoes for updates!

There are no featured audience reviews yet. Click the link below to see what others say about Brand New World!