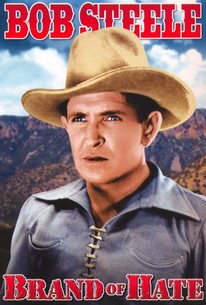 The Brand of Hate Photos

An above-average cast makes up for the lack of production values in this, the second of 32 Bob Steele Westerns produced by A.W. Hackel for the States' Rights market. Steele is Rod Kent, a rancher falling in love with his neighbor, Margie Orkin (Lucile Browne), whom he rescues from an irate bull. Margie, however, is soon in a different kind of danger altogether when her father's evil half-brother, Bill (George Hayes), suddenly appears on the property with blackmail on his mind. When Rod intervenes, his father (Charles K. French) is shot by one of Bill's nasty sons, Holt (James Flavin). Bill's attempt to pin the blame on his half-brother, Joe (William Farnum), fails. Assisted by Margie's kid brother, Budd (Mickey Rentschler), and his faithful pooch, Pardner, Rod rounds up the villains, who are hog-tied and delivered to the Sheriff (Jack Rockwell).

Fred Burns
as fiddler
View All

Critic Reviews for The Brand of Hate

There are no critic reviews yet for The Brand of Hate. Keep checking Rotten Tomatoes for updates!

There are no featured reviews for The Brand of Hate at this time.

The Brand of Hate Quotes