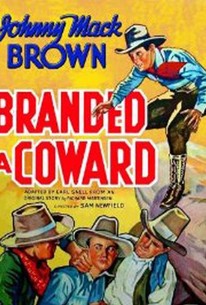 In his first of 16 Westerns for independent producer A.W. Hackel, Johnny Mack Brown is Branded a Coward when instead of preventing a saloon hold-up, he is spotted cowering behind the bar. The reason for Johnny Hume's reticence is to be found in his background: 20 years earlier, little Johnny was orphaned when his parents' wagon was attacked by a gang of outlaws headed by the infamous "Cat" (Yakima Canutt). As the grown Johnny explains to stuttering sidekick Oscar (Syd Saylor), he has been "yellow ever since." Johnny's courage is tested once again when the two friends witness a stage hold-up. After chasing the outlaws away, Johnny and Oscar escort the stage into the town of Lawless, AZ, where female passenger Ethel Carson (Billie Seward) extols Johnny's prowess with a gun. To his embarrassment, Johnny is elected deputy marshal. Secrets from the past keep resurfacing and Johnny must constantly fight his own fears. In the end, the former coward proves his real worth in a final face-to-face struggle with the leader of the stage robbers (Robert Kortman), a villain patterning himself after the original Cat. During the fight, an unusual birthmark on the outlaw's arm reveals him to be Johnny's own brother Billy. Long thought killed in the massacre, Billy has instead been raised by the original, now deceased Cat. Unable to prevent his henchmen from attacking, Billy bravely stops a bullet meant for Johnny.

Mickey Rentschler
as Billy as a child

Yakima Canutt
as 'The Cat'

Rex Downing
as Johnny as a child

Critic Reviews for Branded a Coward

Despite the fine hero performance by Johnny Mack Brown, the pic stubs its toe when it tries to get too smart with a twist ending that comes out of left field.

There are no featured reviews for Branded a Coward at this time.