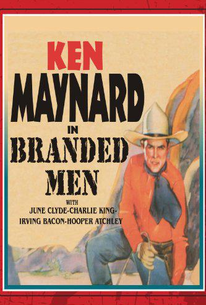 Ken Maynard's Branded Men wasn't up to the standards of his previous Range Law, but it was still better than the usual "B"-western of the era. On this occasion, hero Maynard is travelling in the company of pint-sized comedy relief Billy Bletcher (later the voice of the Big Bad Wolf and Black Pete in the Disney cartoon) and gangly Irving Bacon. Falsely accused of a crime, the intrepid trio spends the rest of the picture clearing themselves, but not before being forced to divest a pompous judge (Wilfred Lucas) of his fancy clothes. June Clyde, a busy musical comedy star, may well be the most talented of Maynard's early-talkie leading ladies. For some reason, Branded Men is the one Ken Maynard western which still pops up with frequency on television.

There are no critic reviews yet for Branded Men. Keep checking Rotten Tomatoes for updates!

There are no featured reviews for Branded Men at this time.