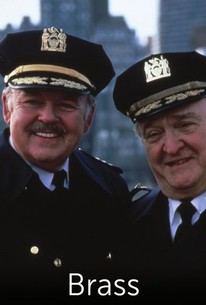 Carroll O'Connor stars as NYPD chief of detectives Frank Nolan in Brass. The script, pseudonymously cowritten by O'Connor and Alvin Boretz, dramatizes two real-life incidents: a sniper attack on Penn Station and a murder in the CBS network parking lot. Though consigned to a desk job, Nolan insists upon hitting the streets to solve the crimes at hand. Vincent Gardenia, who'd previously costarred with Carroll O'Connor on All in the Family as Archie Bunker's next-door neighbor, appears as Chief Mike Maldonato. The director was former actor Corey Allen, best remembered as James Dean's "chicken run" opponent in Rebel Without a Cause. Intended as the pilot for a weekly series, Brass debuted September 11, 1985.

Shirley Stoler
as Woman in Window

There are no critic reviews yet for Brass. Keep checking Rotten Tomatoes for updates!

There are no featured reviews for Brass at this time.