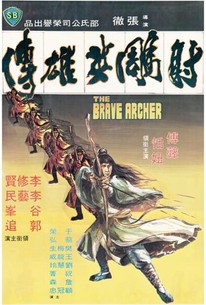 Master kung-fu director Chang Cheh adapts the wildly popular novel The Eagle Shooting Heroes -- which was also the basis for Wong Kar-wai's brilliant Ashes of Time -- to spin this martial arts epic. The film centers on Kuo Ching (Alexander Fu Sheng), a young lad entrusted to a group of kung-fu experts following the murder of his father. One day, one of Ching's favorite instructors is killed by an assassin using the rare but deadly "skeleton claw" move that allows the user to delve his hand into the flesh and bone of his opponent. Ching counters by stabbing him in the stomach, which proved to be the killer's only weak spot. Later, Ching befriends a beggarwoman who is actually an aristocrat in cognito named Yung-er (Tien Niu). Together, they learn of beggar and kung-fu master Hung (Ku Feng) -- also known as the Nine-Fingered Beggar -- who is endowed with such martial power that he can explode a truck with a single blow. After learning from Hung and another master named Cho (Philip Kwok), Ching becomes one of the most powerful fighters in the land. Yet his biggest trial comes when he asks for Yung-er's hand in marriage.

There are no critic reviews yet for She diao ying xiong chuan (The Brave Archer). Keep checking Rotten Tomatoes for updates!

There are no featured audience reviews yet. Click the link below to see what others say about She diao ying xiong chuan (The Brave Archer)!