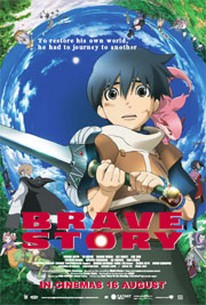 A meek child changes his ways in this anime adventure from Japanese director Koichi Chigira. Wataru is an eleven-year-old boy whose life is not as he would like it to be; he's not a good student, he's bullied by the girls in his class, he's painfully shy, and his parents' marriage is in trouble. The bottom falls out for Wataru when his father leaves town with another woman, and his mother is seriously hurt in an accident. Gathering what little courage he has, Wataru goes to an old house that's said to be haunted, hoping to make his way to another world where wishes can be granted. As it happens, Wataru has indeed found the gateway to the land called Vision, but the journey to the Tower of Fortune, where a magical being can restore his mother's health and his father's fidelity, is fraught with danger. Wataru must find new reserves of bravery and strength as he battles strange and dangerous creatures en route to the Tower of Fortune, but he also meets a number of valued allies along the way. Based on a popular fantasy story by Miyuki Miyabe, Brave Story received its American premiere at the 2007 Tribeca Film Festival. ~ Mark Deming, Rovi

Yo Oizumi
as Kee Keema

There are no critic reviews yet for Brave Story. Keep checking Rotten Tomatoes for updates!

There are no featured audience reviews yet. Click the link below to see what others say about Brave Story!