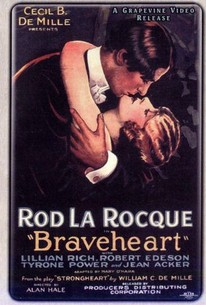 A young, football-playing Indian (Rod La Rocque) is sent to law school by the tribe in order to learn the ways of the white man. Returning to the reservation, the young jurist takes up the fight against a corrupt factory owner (Robert Edeson) who is taking advantage of the Indian labor. Based on an original story by William de Mille, this silent Western was in many ways a throwback to the early 1910s, a time when stories of Indian uplift were commonplace. The Tyrone Power in the cast was the character-actor father of the later 20th Century Fox star. This film was one of a handful directed by future Warner Bros. stalwart Alan Hale.

There are no critic reviews yet for Braveheart. Keep checking Rotten Tomatoes for updates!

There are no featured reviews for Braveheart at this time.