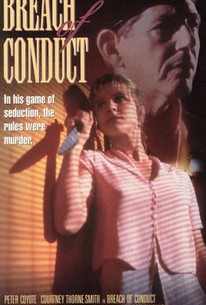 This made-for-cable movie tells the story of a military wife in jeopardy. Tom Verica stars as Lt. Ted Lutz, an Army soldier who has been transferred to a Utah base. When power-hungry commanding officer Col. Andrew Case (Peter Coyote) develops an interest in Lutz' wife Helen (Courtney Thorne-Smith), Lt. Lutz is suddenly shipped off-base, leaving Helen alone on the base to defend herself and fend off the advances of the colonel.

Michael Raysses
as Soldier in Truck

Shayne Adamson
as Corpsman
View All

Critic Reviews for Breach of Conduct

There are no critic reviews yet for Breach of Conduct. Keep checking Rotten Tomatoes for updates!

There are no featured reviews for Breach of Conduct at this time.