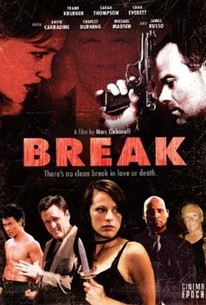 An introverted hitman named Frank is contracted to carry out a most unusual contract in this stylish neo-noir drama featuring Charles Durning, Michael Madsen, James Russo, and David Carradine. "The Man" is the biggest crime boss in the city, and his rule is absolute. When "The Man" discovers that he's terminally ill, he calls on Frank to put him out of his misery. Selfish and jealous, "The Man" doesn't want to die alone - when he goes, he wants his lover to follow behind. But "The Man's" lover isn't just your average gangster's moll, she's Franks long lost love. Upon making this shocking discovery, Frank alters the contract to make himself the next mark. Now, before Frank and his love can escape "The Man's" suffocating grip, they will have to survive a hail of gunfire while defeating every assassin that comes their way.

Ugly and inert, Break strives for grindhouse thrills but lacks the verve and style that made those films so beloved, and is neither sincere nor intelligent enough to develop into anything more.

Break contains all the elements you'd expect from a hard-boiled Quentin Tarantino knockoff: the complicated hit men, the fetishes, the blood baths, not to mention the presence of Michael Madsen and David Carradine.

What's most stunning about Break, beyond its pitifully amateurish production values and badly choreographed fight sequences, is that it actually has name actors in it.

Only Madsen walks away from Break with his reputation unscathed, and this is if only because he's already something of a B-movie kingpin.

There are no featured audience reviews yet. Click the link below to see what others say about Break!