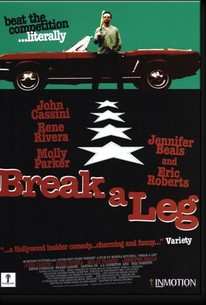 A talented character actor with an undeniable presence on the screen but an uncanny track record of losing roles to more marketable "name" actors decides to take matters into his own hands after losing out on one too many roles in director Monika Mitchell's blood-soaked showbiz satire. Max Matteo (John Cassini) knows that he has what it takes to make it as an actor, but it always seems like there's a producer's nephew just waiting in the wings to snatch the role just out from under him. Now, with nothing left to lose but the role that will most certainly be offered to someone else before the cameras start to role, Max decides to take his fate - as well as various blunt objects - in his hands to ensure a long and rewarding career in a business where there's truly no room for the weak.

Critic Reviews for Break a Leg

A whimper of protest that wants to be a scream.

Audience Reviews for Break a Leg

There are no featured audience reviews yet. Click the link below to see what others say about Break a Leg!