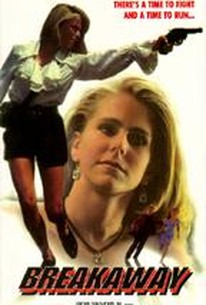 This actioner features notorious figure skater Tonya Harding in a supporting role. The story really centers on Myra, a courier for the Mafia, who after seven years of dangerous work, wants to take her $300, 000 and split. She is accompanied by Dan, and is pursued by a dogged hitman determine to kill her. He comes close to getting her after Myra's boy friend Carter tips him off. He ends up with the loot which he stashes in the apartment of his second girl friend, Gina.

Tonya Harding lets out some of her pent-up Kerrigan anger by pummeling a mob type with some not-so-nifty 'martial arts' moves that make Elizabeth Berkley look like Bruce Lee.

There are no featured reviews for Breakaway at this time.