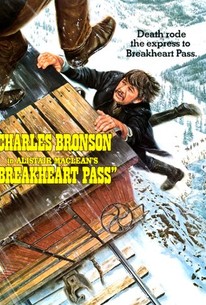 Posing as a fugitive from justice, frontier undercover agent John Deakin boards a train to go after a ruthless gang of outlaws. Ingredients essential to the action include an anti-military conspiracy involving gunrunners and Indians, a phony epidemic, and a down-and-dirty train-top fight between Deakin and Carlos.

The movie offers an unusual spin on a classic Hollywood genre... by starting in a relatively civilized part of late-19th-century America and then rolling way out into the wilderness, becoming more of a Western as it goes.

Director Tom Gries serves up every cliché with refreshing exuberance, and his cast is just about perfect.

The pity is that the level of achievement is so simplistic that boredom sets in rather quickly.

[It] attempts to break [Bronson's] usual mould of either a contemporary western or violent macho melodrama by combining the western with a murder mystery. It succeeds only in being wildly tame in the one genre and highly conventional in the other.

Charles Bronson is on his way to become a caricature of himself. [Full Review in Spanish]

The plot twists and turns as it careers towards its destination.

Breakheart Pass is an oddly inert affair, lacking the operatic violence of The Good, The Bad, and the Ugly, the mean realism of The Outlaw Josey Wales, or the classic romance of John Ford

It's a fun film that whips by and, a few moments of brief but bloody violence aside, is one for the whole family.

Pass is an engaging adventure with a few surges of action, an unexpected commitment to brutality, and an irresistible collection of disasters to hold attention.

Trains, murders, and a tough guy - Charles Bronson. What, another 'Taking of Pelham 1-2-3?' Nope, wrong. Breakheart Pass is a western that actually features action on a train, not just a train full of bad guys pulling into Dead End Gulch. The movie adaptation was based upon the novel by famous yarnster Alistair MacLean, who also wrote the screenplay. An unusual murder mystery, Breakheart Pass has Charles Bronson, and old-school badass, who steps out of his usual tough guy role, and plays a dangerous murderer. Wait, I guess that's not so different from his usual roles! However, in this film, he shows some of that craggy charisma he did in films like the Magnificent Seven. In fact, it's probably the most lines he ever had in a movie. Set in the 1870's, aboard an army supply train in the Old West, the film is noteworthy because it's quite different from the usual gunslingers and range wars fare. Bronson plays his character with the usual grim-faced, gravel-voiced skill, and he's surprisingly effective here. The film also has a load of familiar old film stars supporting him in various roles, and they all look right at home in this western. The mystery of what's going on is slowly unraveled as the train chuffs slowly through the snowbound wilderness. There's some very cool photography, and the fact that it was shot aboard an authentic steam train in some beautiful locations elevates it from the humdrum. Although the pacing is a little slow, it does move along, sort of at a 1870 steam train pace. Unlike static western town scenarios, this murder mystery action western has some great scenery and action on and nearly off the train. The characters are straight out of the book with a few modifications, and they're all distinct and interesting. Charles Durning, Richard Crenna and Ben Jonson put on their Western personas here, and have fun with it. The result is an entertaining yarn about the old west, and there's even a pretty damsel (a still youthful Jill Ireland - Bronson's wife). It's a straightforward script, with good guys, bad guys, and those caught in between. It's up to you to figure out who really is who they say they are.

This is a very intriguing film. With some twists and mystery. Bronson is cool as cool can be, but most of the supportings hold their own weight. To be corny, this film is just a fun effing train ride. With an incredible theme song by Jerry Goldsmith.