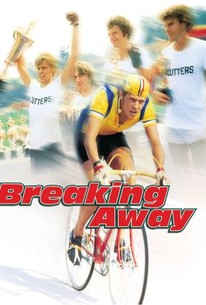 Critics Consensus: At once a touching, funny coming-of-age story and a compelling sports film, Breaking Away is a delightful treat.

Critics Consensus: At once a touching, funny coming-of-age story and a compelling sports film, Breaking Away is a delightful treat.

Critic Consensus: At once a touching, funny coming-of-age story and a compelling sports film, Breaking Away is a delightful treat.

This charming, Academy Award winner (1979, Screenplay) cycles high on comedy as four friends come to terms with life after high school. When top-notch cyclist Dave (Dennis Christopher) learns that the world's bicycling champions are always Italian, he attempts to turn himself into an Italian, driving his parents (Barbara Barrie, Paul Dooley) crazy. But everything changes after he meets the Italian racing team-an encounter that ultimately leads him and his friends (Dennis Quaid, Daniel Stern, Jackie Earle Haley) to challenge the local college boys in the town's annual bike race.

Critic Reviews for Breaking Away

I seriously can't imagine anyone not liking it.

It's very, very much worth seeing.

There are a few moments when the picture's easygoing pace turns into wobbliness, but these are insignificant compared with its many moments of shrewd insight into the lives of amusingly shaded but very recognizable human beings.

Though its plot wins no points for originality, Breaking Away is a thoroughly delightful light comedy.

Peter Yates, previously typed as an action director, lends the film a fine, unexpected limpidity, and the principals are mostly excellent.

Displays the kind of unsentimental optimism that went out of fashion with Hawks.

A textbook definition of a sleeper hit.

Part coming of age comedy, part underdog sports tale, and part glimpse into small-town America, the film is an effortless joy as it explores a tight friendship approaching the inevitable.

It manages to be pleasant and upbeat, even as it focuses on the pessimism of uncertain futures and the stresses of small town tedium.

Breaking Away embraces the good old fashioned small town family values that would catapult Ronald Reagan to an enormously popular two term presidency. And still, I like it.

Audience Reviews for Breaking Away

A feel-good, inspirational story concerning an offbeat teenager who discovers his love for biking, despite his non-supportive father (Paul Dooley) wanting him to grow up and accept adulthood as a member of the "cutter" class. While it suffers from a couple scenes that come across as over dramatic and one of the plot points is just downright awful, this movie is still hard not to love given the energetic lead performance by Dennis Christopher, as well as the fact that this is a great coming of age story. Sure, it's absolutely corny at times, but if you really don't fall in love with this movie, especially the last big race scene - something is wrong with you.

The essential biking film! If you're into sports movies, love riding bikes, or compete in bike racing yourself, you will love this movie. It's a great sports drama about both bikes and growing up.

This film really impressed me the first time around. But since I haven't seen it since then (about 1984 or so), my rating is based on fond memories. If I see it again and it doesn't hold up, I'll re-evaluate.

This is my friend Gwen's all-time favorite movie. It turned her into a bike fanatic. Great early work from a young Dennis Quaid. My how time flies.