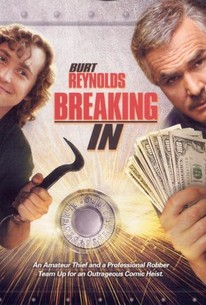 An aging cat burglar takes on a young protege in this comedy. Though the young man is green and a bit wild, the seasoned pro (Burt Reynolds) sees potential and so patiently attempts to instill in him notions of caution and pride in his work. He also tries to share his deeply felt philosophies, but unfortunately, his student is too obsessed with his youth to really listen.

Sheila Kelley
as Carrie aka Fontaine

Lorraine Toussaint
as Delphine the Hooker

Frank A. Damiani
as Waiter

John Baldwin
as Sam the Apostle

Eddie Driscoll
as Paul the Apostle

Galen B. Schrick
as Choir Master

Critic Reviews for Breaking In

Breaking In has been billed as a comeback for Reynolds, but maybe it's simply a well-written, well-directed picture.

Written by John Sayles and directed by the Scottish director, Bill Forsyth, the film works at certain levels by combining Sayles' local American realism with Forsyth's rather quirky sense of humor.

Not much happens, but it is entertaining

A low-key and intriguing teaming of John Sayles and Billy Forsyth that features a terrific performance by Reynolds.

Breaking In is a charming, warm and completely entertaining movie - the kind you'll enjoy best after sitting through something particularly mindless and loud.

Audience Reviews for Breaking In

Unusual buddy film as old hand burglar/safecracker Reynolds (thankfully lowkey for a change - avoiding his usual big Cheesy Ham persona) takes in a young guy and teaches him the ropes of nighttime illegality. Its better than you might think and also good on the difficult reality of actually breaking into a place designed to keep people out, quite unlike the plethora of Hollywood films that depict breaking and entering to be as easy as pulling a plastic card out of yer back pocket.