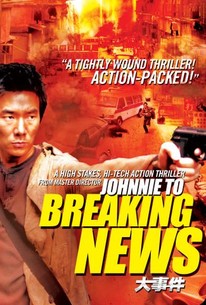 Hong Kong-based filmmaker Johnny To directed this fast-moving action drama that explores the role of the media in current events. The Hong Kong police force takes a beating in the court of public opinion after their unsuccessful attempt to foil a high-stakes robbery is broadcast on live television. Determined to turn the tables, detectives on the force discover where the five criminals who masterminded the job are lying low, and they stage a major siege at the hideout. The hundreds of police officers have also armed themselves with cameras along with their guns as they turn the ambush into a media event. The thieves prove to be a difficult quarry to capture and they use their own video equipment to send pictures to the press at the same time, turning the shootout into a battle of images as well. Breaking News stars Kelly Chen, Richie Jen, and Nick Cheung.

Yong You
as Chun

[Breaking News] is one of [director] To's typically tangled meditations on the smearing of good and evil, in moments where instinct overcomes morality.

A film filled with terrifically choreographed action and very little on its mind.

Johnnie To's direction is once more impressive, particularly the way he stages and shoots the action, taking full advantage of the narrow corridors of the building the gang has taken a stand in

This is a film Michael Bay would green light in a heartbeat.

A brainless but harmless display of senseless slaughter!

...another in a long line of expertly made Johnnie To films. While it may not be the director's best work, it has some knockout sequences.

Breaking News lives up to its title and is another successful Hong Kong crime thriller for Johnnie To.

The story only takes 90 minutes to unfold and it starts off on the right foot. The 10 minute introduction does what it's supposed to do; introduce the characters, set up the story, and deliver flying bullets. To top it all off, it is done in one continuous cinematic shot. The film does move at a slower pace, but the concept of the story helps to avoid complete boredom.

The action is unleashed at the right moments, which isn't a whole lot in comparison to the rest of the story; however, those segments are nicely written.

Richie Ren is cool, calm, and collected. The trio of major cast members is rounded out by Kelly Chen and Nick Cheung.

The opening sequence alone is worth a checkout. The rest of Breaking News is also recommendable.

"Breaking News" starts with a stakeout of Yuen's(Richie Ren) gang going badly awry as it devolves into a running shootout. To make matters worse, a policeman is killed, the criminals get away and the whole fiasco ends up on the nightly news. Deputy Commissioner Rebecca Fong(Kelly Chen) comes up with the idea of the police videotaping the arrest of the criminals in order to reassure the public that they can do their job properly. Inspector Cheung(Nick Cheung) is one step ahead of them and still on the case, by the way, has cornered the criminals in an apartment building. There is a lot in "Breaking News" that might seem familiar to viewers with its media coverage of an ongoing police situation. What's different here is the lack of chaos, with both sides vying to be in control of the message and attaining levels of success. So add to that Johnnie To's kinetic style of filmmaking(especially in the opening tracking shot that gets more suspenseful as it goes on) and you have a smart thriller that also entertains. However, the movie is not without its share of faults with inappropriate comic relief and major characters that come and go as they please.

With a highly impressive 7-minute opening scene done in a single take, it raised my expectation level on how enjoyable the rest of the film might be. It just fizzled from that point on.

From the opening 7 minute shootout between the cops and the dastardly group of bank robbers, you known Breaking News is not going to be your average cop movie It is in fact of the most amazingly choreographed and scripted movies I've ever seen. The action is terrific, performances incredible, especially Richie Jen and the filming entirely in the building is just extraordinary.