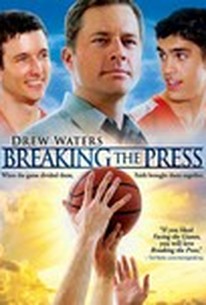 Friday Night Lights's star Drew Waters headlines this modern retelling of the Prodigal Son parable centering on a high school basketball coach whose faith is shaken when his talented adoptive son turns his back on both his family and his team. On the heels of a difficult season, Joe Conaghey's adopted son Josh decides to transfer schools so he can play with a better ranking team. With his star player gone, the dejected coach's faith takes a major hit. Now the only thing that can bring Josh home to the father who loves him and the teammates who once supported him is trust in the lord, and human compassion.

Kim Whalen
as Sarah
View All

Critic Reviews for Breaking The Press

There are no critic reviews yet for Breaking The Press. Keep checking Rotten Tomatoes for updates!

Audience Reviews for Breaking The Press

There are no featured audience reviews yet. Click the link below to see what others say about Breaking The Press!