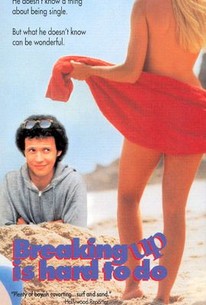 Six recently divorced males gather 'round a restaurant table and talk about their past lives and their recently failed marriages while trying to piece their lives back together. This drama is somewhat interesting for presenting the topic of life after a divorce from a man's point of view. (And yes, Neil Sedaka sings the smash title song over the final credits - so don't change that dial!) Originally made for television, and broadcast on ABC in two parts - one on Wed., Sep. 5, 1979, and one on Friday, Sep. 7, 1979 -- this film was reissued on video about ten years later to capitalize on Billy Crystal's growing fame. When it arrived on home video, the picture received its first MPAA rating (R) and was edited down from its original running time of 150 minutes to 96 minutes.

Critic Reviews for Breaking Up Is Hard to Do

There are no critic reviews yet for Breaking Up Is Hard to Do. Keep checking Rotten Tomatoes for updates!

There are no featured reviews for Breaking Up Is Hard to Do at this time.

Breaking Up Is Hard to Do Quotes