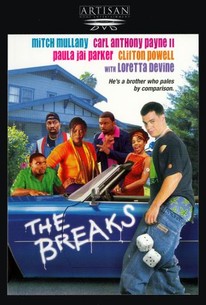 In this hip-hop oriented comedy, Mitch Mullany plays a guy living in Oakland, California, who's having a really bad day. Of course, the fact that he's one of the only White people living in his neighborhood doesn't help -- especially since he goes out of his way to "act Black." The Breaks features cameo appearances from NBA star Gary Payton and legendary funkmaster George Clinton.

Critic Reviews for The Breaks

There are no critic reviews yet for The Breaks. Keep checking Rotten Tomatoes for updates!

Audience Reviews for The Breaks