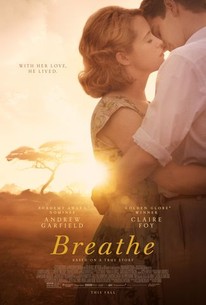 Critics Consensus: Strong performances from Breathe's well-matched leads help add an edge to a biopic that takes a decidedly heartwarming approach to its real-life story.

Critics Consensus: Strong performances from Breathe's well-matched leads help add an edge to a biopic that takes a decidedly heartwarming approach to its real-life story.

Critic Consensus: Strong performances from Breathe's well-matched leads help add an edge to a biopic that takes a decidedly heartwarming approach to its real-life story.

For his directorial debut, Andy Serkis brings to life the inspiring true love story between Robin and Diana Cavendish (Andrew Garfield, Claire Foy), an adventurous couple who refuse to give up in the face of a devastating disease. When Robin is struck down by polio at the age of 28, he is confined to a hospital bed and given only a few months to live. With the help of Diana's twin brothers (Tom Hollander) and the groundbreaking ideas of inventor Teddy Hall (Hugh Bonneville), Robin and Diana dare to escape the hospital ward to seek out a full and passionate life together - raising their young son, traveling and devoting their lives to helping other polio patients. Written by two-time Academy Award nominated writer William Nicholson, and shot by three-time Academy Award winner Robert Richardson, BREATHE is a heartwarming celebration of love and human possibility.

It's an eerily skilful performance by Garfield, making it easy to imagine that he really is trying to master the art of speech by regulating his flow of available air.

Robin's story is certainly a tale of near-triumph over adversity, and the director manages to keep cheap sentimentality at bay. In many ways this is a very English story about intestinal fortitude and the stiff upper lip.

The producer of Breathe, Jonathan Cavendish, is the son of the incredible couple whose story is immortalised in the movie, giving it a weighty, personal connection that transcends some empty exercise in virtue.

Part exuberant love story, part great escape adventure, this is an old-fashioned tale of triumph over adversity that refuses - like its protagonists - to succumb to confinement.

Whenever things take a turn for the surreal, as opposed to the sentimental, Breathe expands.

Breathe will bring a lump to the throat with its passionate but un-showy telling of two individuals who sought to change the status quo.

Breathe doesn't have the gravitas of The Theory of Everything - it spends too much time trying to wring all the emotion out of the story like tears from a sponge - but it does have compassion and heart.

As disability dramas go, Breathe won't leave you gasping. But if it lacks The Theory of Everything's emotional heft, it remains an inspiring and affecting tale.

Alas, as far as mainstream studio cinema is concerned, the disabled are still merely props for us to aspire in matching their bravery. Maybe it's time we told their stories with some empathy rather than pity.

Breathe separates itself from the pack in its production.

Andy Serkis' first directorial effort is traditional to a fault. His sole focus seems to be to move the plot forward, in circumstances the best moments of Breathe take place whenever he takes the foot off the gas.

This is another great performance from Andrew Garfield in what is a touching and heartfelt story about overcoming serious illness. As this is a real-life story it is even more poignant, especially seeing the strength of character shine through that also led to a medical innovation now common all over the world. Highly recommended.