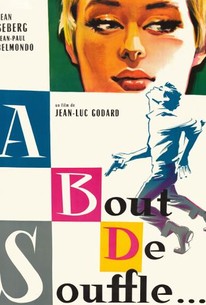 Critics Consensus: Breathless rewrote the rules of cinema -- and more than 50 years after its arrival, Jean-Luc Godard's paradigm-shifting classic remains every bit as vital.

Critics Consensus: Breathless rewrote the rules of cinema -- and more than 50 years after its arrival, Jean-Luc Godard's paradigm-shifting classic remains every bit as vital.

Critic Consensus: Breathless rewrote the rules of cinema -- and more than 50 years after its arrival, Jean-Luc Godard's paradigm-shifting classic remains every bit as vital.

Enjoy brunch in the Torpedo Room before screening BREATHLESS hosted by John DeSando and Johnny DiLoretto. There was before BREATHLESS, and there was after BREATHLESS. Jean-Luc Godard burst onto the film scene in 1960 with this jazzy, free-form, and sexy homage to the American film genres that inspired him as a writer for Cahiers du cinéma. With its lack of polish, surplus of attitude, anything-goes crime narrative, and effervescent young stars Jean-Paul Belmondo and Jean Seberg, BREATHLESS helped launch the French New Wave and ensured that cinema would never be the same.

Philippe de Broca
as A Journalist
View All

A hip, jokey thriller in which the sketchy plot serves as an excuse for stylistic flourishes and philosophical asides.

With the appearance of Breathless, we have a film that is new, aesthetically and morally.

Breathless jumps to its own rhythm and pokes holes in its idols even as it worships them.

On its fiftieth birthday Breathless remains fresh and exciting, although its revolutionary approach has long since been absorbed into the mainstream, and the years do show on it a bit.

Even 50 years later, it's easy feel how vivid a game-changer Breathless must have been when it arrived.

This movie liberated the cinema -- the stories you could tell and the ways you could tell them -- as clearly and cleanly as Picasso freed painting and the Sex Pistols rebooted rock.

Make no mistake about it, this film still deserves its place in the canon of cinema.

Breathless made my world when I first encountered it. Decades later, I still love it.

Despite its unlikable characters, Breathless doesn't lack feeling. It is a compelling story to watch with a satisfying ending.

It's an upbeat, jazzy, cops-and-robbers crime drama with the tone of a romantic comedy and the plot progression of an unfocused documentary.

Mike Massie
Gone With The Twins
View All Critic Reviews (71)

A landmark in cinema history, due mostly to revolutionary editing techniques, pop culture references, and a biting undercurrent of intellectualism.

What became the French New Wave movement started with this debut from fledgling director Jean-Luc Godard, a man who has changed perspective, and the minds of his audience, since this first film appeared on the scene. Cobbled together with a small budget, with little time, and no experience, it doesn't meet the traditions of classic Hollywood films, but still retains an authenticity unrivaled throughout time. What this film really embodies in sentiment, is that it's cool. Even the characters are alternative, since one is a sex obsessed gangster with a penchant for showy gestures and little conviction, and the other is a pixie haired student, intent on being free and unburdened. They don't seem to have the same ire for traditional constructs as Hollywood heroes and heroines of the past. Throw in chase scenes, sex, jazz, and rough editing and shooting and this film is the epitome of new and smooth. Even though I didn't fully understand the New Wave movement before I saw this film, I immensely enjoyed how vibrant this film was. It really is the first instance of a director not caring about the constraints of filmmaking, and just makes a film that embodies new ideals and tries to tell a story without the problems of plot or structure. For anyone who wants to watch a film that feels timeless in many ways and yet very classic, this is the film for you.

"Breathless" is the perfect definition of Romance and Thriller, because the entire time, you are wondering if the accusations are real, even though you kind of know that they are. I loved every second of this film, because it was the beginning of the era that sparked the romance/thriller genre. I do believe that reoccurring moments throughout this film really hold up, and the physical signature that the main character gives after he smokes his cigarettes or is around his lady, is very memorable. This is one of the best classics I have seen, and the plot thickens as the film progresses. Although it shows it's age at times, making many jump cuts, it is forgivable when you are immersed in this incredibly told story. What a film!

After hearing so damn much about this movie and its reputation, I was sure that I would either love it, or be disappointed by it, mostly because it couldn't possibly have lived up to the hype. Well, now that I've watched it, I'm gonna give it a review, but I'm gonna be bold and saw that, despite all that I'm about to write, I think I might need to see it again before I can really assess how I feel about it. I should probably just watch it again before I do this review, but I don't have the time right now, so just there. Jean-Luc Godard's feature debut (a seminal part of the French New Wave) is a breezy, hip, and wonderful 90 minute joy ride that pretty much defined several areas of life and cinema, creating an influence that still lives on to this day. As per the hallmarks of the FNW, this film features improvised dialogue, location shooting (with natural lighting), and a loose narrative structure. In the case of this film though, the narrative is not only loose, it's almost non existant. I mean, really, the plot is that of a petty criminal (modeling himself after Bogart) who kills a man, goes on the run, and seeks refuge in the company of his American girlfriend. That it's The bulk of the movie is just crusining around or chilling at home, with talking being the most dominant activity that occurs (with smoking and being cool right behind). By definition this is a crime film, yet it's really just a fun hang out movie. People just hang out and be cool and stylish, and that's it. But this film is done in such a great way that I undersatand why it is so beloved and influential. Godard's trademark use of jump cuts can be a bit off putting at first but they add to the spontaneity of things. Stylistically, this film is top notch, but in terms of cinematic style and all aorund design. The clothes, music, sets, and all of that are just awesome. I kind of hate this movie for being so cool and hip. I'm probably just jealous. This film is pretentious, I won't lie, but I feel like a traitor for calling it out. Maybe Godard didn't plan on it being that way, or maybe he did and I'm just a fool for buying into it like so many others have. Regardless, this is one of those films whose legacy you can't deny, even if it isn't your thing. You really do need to see this, as it is required viewing for even the most casual of film lovers.