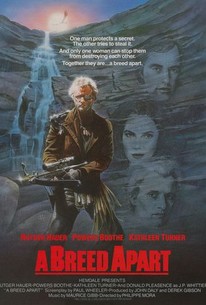 Surly conservationist Rutger Hauer makes it his life's mission to protect the eggs of the endangered bald eagle. Collector Donald Pleasence wants to appropriate a few of these eggs without invoke Hauer's terrible wrath. Pleasence hires mountain climber Powers Boothe to pose as a magazine photographer, the better to win Hauer's confidence and expedite the egg-poaching. But Boothe is soon converted to Hauer's cause, and with the help of storekeeper Kathleen Turner the two men thwart Pleasence's anti-eco deviltry. While the acting and plotline of A Breed Apart are unremarkable at best, the film is redeemed by the breathtaking location photography of Geoffrey Stephenson.

Critic Reviews for A Breed Apart

This environmental and love adventure is directed with an uneven rhythm by Philippe Mora. [Full Review in Spanish]

[Rutger Hauer is] frequently seen riding around his island on a white horse, wearing pirate's clothing, and holstering a cross-bow.

Audience Reviews for A Breed Apart