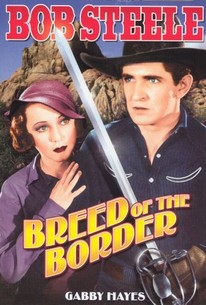 In a slight change of pace, low-budget Western star Bob Steele plays a cowboy-turned-race car driver in this otherwise typical Paul Malvern production directed by the star's father Robert North Bradbury. Steele's happy-go-lucky Speed Brent gets involved with escaped prisoner Killer Joe (Ernie Adams), who hires him to drive him to the Mexican border. Knocked unconscious by one of Joe's henchmen, Speed recovers to find Judge Stafford (John Elliott) seriously wounded and the victim of theft. Along with the judge's bearded foreman Chuck Wiggins (George "Gabby" Hayes), Speed vows to track down the gang and later hooks up with Sonia (Marion Byron), a government agent masquerading as a saloon girl. Killer Joe, meanwhile, attempts to escape by car, but is chased down by Speed, who forces him over a cliff to his death.

Horace B. Carpenter
as doctor

Hal Price
as inspector
View All

Critic Reviews for Breed of the Border

There are no critic reviews yet for Breed of the Border. Keep checking Rotten Tomatoes for updates!

There are no featured reviews for Breed of the Border at this time.

Breed of the Border Quotes